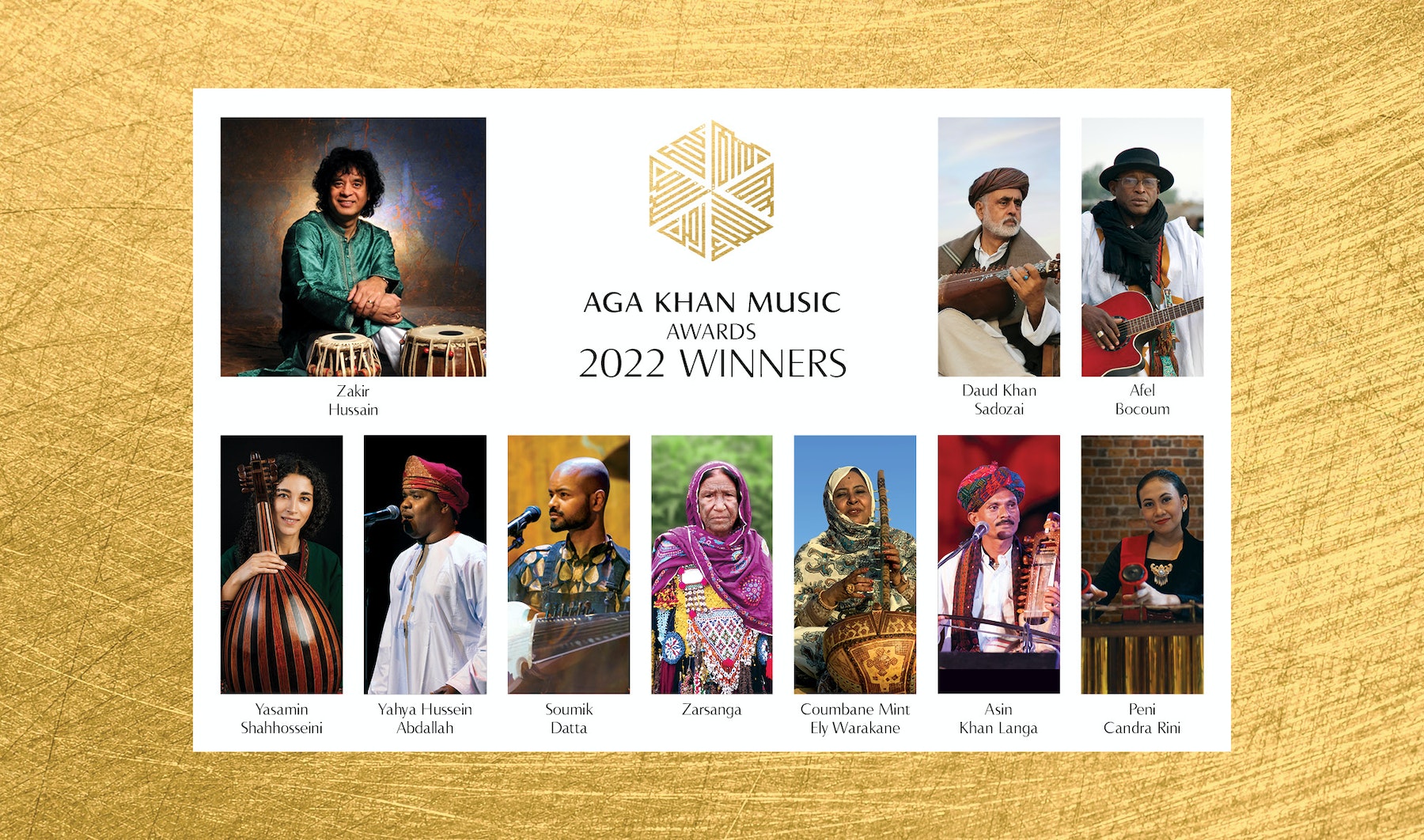 This page is also available in

Geneva, Switzerland, 6 October 2022 – Laureates of the 2022 Aga Khan Music Awards were named today. The triennial Awards, established by His Highness the Aga Khan in 2018, recognise exceptional creativity, promise and enterprise in music in societies across the world in which Muslims have a significant presence. Award winners and recipients of a Special Mention will share a prize fund of $500,000 as well as opportunities for professional development. These opportunities include commissions for the creation of new works, contracts for recordings and artist management, support for pilot education initiatives, and technical or curatorial consultancies for music archiving, preservation and dissemination projects.

The Aga Khan Music Awards reflect the conviction of His Highness the Aga Khan, 49th hereditary Imam of the Ismaili Muslims, that music can serve as a cultural anchor, deepening a sense of community, identity and heritage, while simultaneously reaching out in powerful ways to people of different backgrounds.

In naming the laureates, the Awards Master Jury expressed its desire to support as many outstanding nominees as possible from the geographically and culturally diverse pool of close to 400 nominations in a time of urgent need for musicians and music educators. While contributing to the preservation and ongoing development of musical heritage, many of the laureates draw on the power of music to raise awareness about social and environmental issues.

Laureates of the Aga Khan Music Awards will be celebrated at a ceremony and series of affiliated events in Muscat, Sultanate of Oman, organised in conjunction with the Aga Khan Award for Architecture on 29-31 October 2022.

The laureates of the 2022 Aga Khan Music Awards are:

Winners (Full biographies of the laureates are available here)

Special prize for Lifetime Achievement in recognition of his highly visible model of enlightened cross-cultural musicianship that has elevated the status of the tabla both in India and around the world through countless artistic collaborations, concert tours, commissions, recordings and film scores.

Singer and guitar player from Niafunké, Mali whose music combines acoustic guitar with local instruments to echo the sound of “desert blues” in an earthier, tradition-based style.

Singer and ardin (harp) player from Trarza, in southwest Mauritania, who performs the music of Mauritanian griots in a deeply traditional style.

Leading exponent of the Afghan rubab who has had a major impact on the preservation, development and dissemination of Afghan music worldwide.

Singer and composer of devotional songs and reciter of the Qur’an from Dar es Salaam, Tanzania who composes and sings in Swahili as well as some of Tanzania’s 126 local languages.

Leading young master of the oud who is reimagining the place of this instrument in Iranian music through her innovative compositions and improvisations.

Singer from Khyber Pakhtunkhwa, Pakistan, known as the Queen of Pashtun Folklore for her career-long devotion to the orally transmitted traditional music of tribal Pashtuns.

Tenth-generation sarangi player from a hereditary lineage in Rajasthan who is expanding the language of the sarangi in film music and through innovative cross-cultural collaborative projects.

Four women who perform Iranian traditional music with a contemporary sound and are active as teachers, with a special focus on transmitting their musical tradition to girls and women.

Punjabi musician with a lifelong practice of singing Sufi poetry in local shrines and festivals, often accompanied by ecstatic dance.

Founder and long-time director of Mahoor Institute of Culture and Arts, who has made seminal contributions to the development of Iranian music and musicology.

Revitalisers of Acehnese song traditions who have cultivated community building amongst youth through their participation in Bur’am, a traditional singing and drumming ensemble established by Zulkifli.

The Aga Khan Music Awards Master Jury also named Musallam al-Kathiry as the winner of a special award for Excellence in Service to Omani Musical Heritage. Mr al-Kathiry, a music researcher, arts manager, performer and composer from Muscat, Sultanate of Oman, has made important contributions to the collection, documentation, preservation and dissemination of Omani music.

Full biographies of the Master Jury members are available here

Full biographies of the Steering Committee members are available here

This press release is also available in the following languages: